February 19, 2007
Last week I had a chance to participate at the 8th Asia Open Source Software Symposium in Bali. I am just a participant in that event. 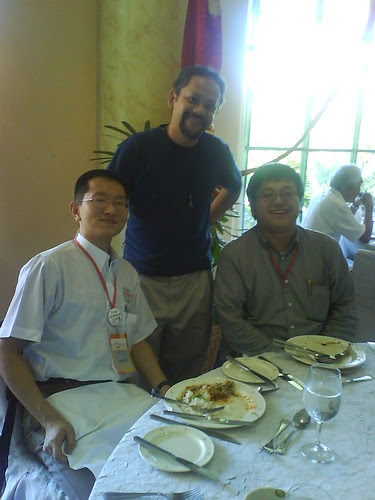 In this event I met with Niibe Yutaka, a Debian developer from Japan. (He's on the left in the picture.) Well, since I am a Debian user, we had a chat. A day earlier, I was wearing Debian T-shirt and somebody thought that I am from Debian. Whoa.

On a different note, he said that he contributed to the japanese (version? extension?) of emacs as his "night job." Ha ha ha. I told him that I am a "vi" user. Ha ha ha. We are from different "editor religion."

[For those who are not familiar with the joke, here's a little brief story. Most old UNIX users had two camps of editor: vi and emacs. We joke to each other. Nowadays, there are better[?] editors, but I still use vi. Even on my MS Windows computer, I use vi (or vim, to be exact). It's just a habbit.]

Niibe asked me why there's no Debian developer in Indonesia. Good question. I don't know. For me, I don't even have a chance to tinker around with low level software or operating system.

Last time I played with operating system was GNU/Hurd. It was interesting at that time since it was so limited (the biggest partition size you could get is 2 GB!), but now GNU/Hurd is much better. There's still not many people are interested in it though. I guess it's because Linux is more widely available. To me, Linux is already mature. It's not fun anymore :) ha ha ha. But GNU/Hurd is more fun since you can experiment with things (and it will crash)... ha ha ha. It's fun. It's just a matter of time that GNU/Hurd is becoming more popular.

The symposium was mostly high level discussion. So, I just sat there and listened to various speakers from different countries. Sorry no summary. It should be on a web site, somewhere...

Arief said…
Waw... How come I don't know that there's a Debian event in Indonesia. Hiks...

Anyway, I've long been thinking to be a DD also, but really haven't got a time to spare. It's still on the "this year" TODO list.. :-(

On GNU/Hurd, last time I checked, they're not making a nice progress. The Hurd-Mach versions seems to be getting better, though. But the Hurd/L4 is suspended and the developers will re-think about the architecture.
11:13 PM

adinoto said…
Check out www.haiku-os.org for real fun :P, BeOS is back :D

Linux is no more fun for me. Too time consuming, and for home I'll settle with OS X. For deployment, I would consider OpenBSD anywhere I can.
10:58 PM

Budi Rahardjo said…
Arief, it was not a Debian event per se. It was an open source event. We (debian users) were just happened to be there.
5:30 AM

I have come across your site, The Ultimate Indonesian Webpage and found someof the links quite useful. I was hoping you could help me a bit further. I am looking for a list of schools and universities in Indonesia and am not able to find this information on the Internet. Would you be able to tell me where I can find this information?
Thank you very much. You can email me at nosheenladha@gmail.com.

Popular posts from this blog

Would Indonesians switch to Telegram (from WhatsApp)? No!

January 11, 2021
My telegram feed shows a lot of people subscribing to Telegram. What gives? Apparently, many people are starting to install Telegram because they are worried with the latest WhatsApp's privacy policy update. (I should put links here.) So, that's it. In short, in my opinion there's no need for the migration. I have an explanation in a video, but it's in Bahasa Indonesia. It's here. Now, back to the "euphoria" (if you can call it that). Would people start abandoning WA (WhatsApp) and switching to Telegram? Is it for good? I don't think it is happening. It's like abandoning Microsoft Windows for Linux. Linux is as good as Microsoft Windows. (In my personal opinion, Linux is actually better, but this is from a techie person who have been using Linux since its early stage. I am biased.) Have you seen majority of people migrating to Linux? No. People are staying with Windows. Why? Because, we are used to Windows. Linux as a nice desktop too, but it is no
Post a Comment
Read more